Since the year 1727 carnivals have been celebrated in a peculiar way. It is the "Sargentería" or "Brotherhood of the Souls", which was instituted in this town of Almorox following an outbreak of plague that took place in the locality, wich aims to, written in the first entry of the book of the Brotherhodd in March 1, 1727:

Since its begin, the Sargentería of Almorox, has been composed by marriages that have volunteered each year to take the reins of Soldadesca for the period of one year. The Sargentería is composed of a series of positions that compose a hierarchy. At the head is the captain, followed by two "masters" or ensigns, and the Lieutenant-bearer. The rest of the men and women are the sergeants, carrying the halberds. The men wear a jacket suit with a tie, and the women wear a shawl and can change their outfit on Carnival Sunday. The captain and the ensigns carry canes with flags with the colors of the national flag and embroidered the following legend: "Hermandad de Ánimas". The standard bearer carries the national flag, and the rest of the sergeants the halberds wear black crepes. They go in all the acts of the party accompanied by the drum rolls that confer a marked military character.

The Carnival of Souls of Almorox begins the Sunday of Carnival. The Sargentería, after having gone to Mass, they then go to the square where one of the most attractive acts of the party takes place: 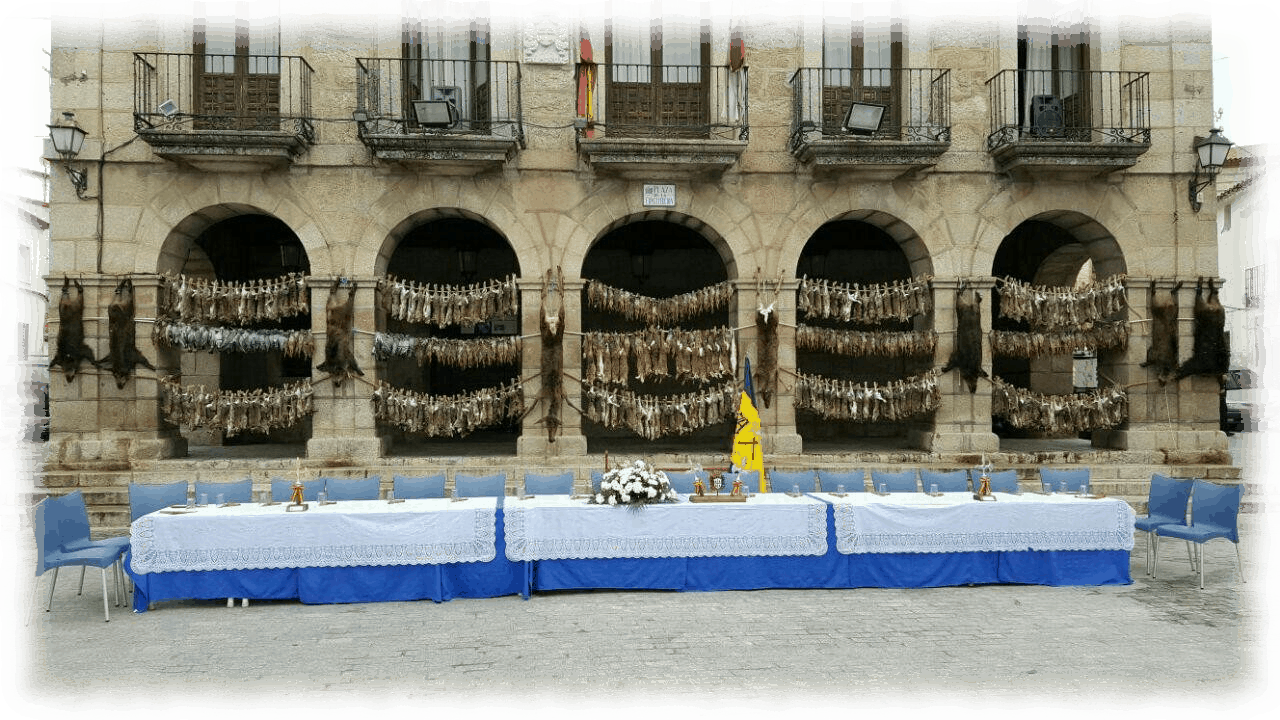 On Monday afternoon the celebration of the mass takes place, and later the Sargentería goes to the square to dance the flag of Animas, that is composed of three horizontal stripes: two of purple color and one of yellow color. In the center are the initials "AB" (Blessed Animas). It is tradition in these days that after the flag dance the sergeants invite the people to the traditional refreshment composed of lemonade, roasted chickpeas (tostones) and biscuits.

Tuesday of Carnival is the most representative day of the party. Before mass, the old Sargentería meets in the house of the captain, from where they are accompanied by a drum in search of the new Sargentería. Once these have joined the entourage, they go in search of the civil and religious authorities. On their way to the church they have to pass through the square and fulfill a peculiar rite: to give the three turns to the beautiful jurisdictional roll or "picota". Once they have reached the door of the church, the sergeants raise and cross their halberds forming a corridor through which the whole procession to enter the temple. During the mass, a few sergeants with their halberds are escorted on the sides of the church. At the time of the offertory, what is known as the "collection" takes place: first, the Sargentería and then the town, proceed along the central aisle until the donation is placed on a tray placed at the foot of the high altar, while continuous drum roll is heard. At the moment of the Consecration, the standard bearer prostrates himself with the flag on the ground in a sign of respect. After Mass the procession with the image of the Holy Sepulcher takes place. The procession goes down to the square where it surrounds the pillory to return again to the church.

After the religious acts, the sergeants return to form the colorful hall of halberds to go to the square where another of the most emotional and important acts for the sergeants takes place: the flag dance. At this moment men and women demonstrate their skill and dexterity executing different movements with the flag before the ovation and the applause of their neighbors.

In the afternoon the party comes to an end with the most emotional act: the transfer of Sargenteria from the old sergeants to the new ones. This act takes place in the parish church, where the sergeants swear before the bible and a crucifix, and commit themselves to fulfill the ends of the Brotherhood. The exchange of positions and jewerly takes place, and again they return to the square to finish the party with the traditional dance of the flag.

On Ash Wednesday, all sergeants or cofrades together go to Mass to take Ash.

Its celebration begins on May 2 with the descent of the image from the Hermitage of the Virgin of the Piety to the Church of San Cristobal. At midnight the Almorox sky is illuminated with a pyrotechnic spectacle sponsored by the brotherhood of the Holy Christ.

On May 3, when the Discovery of the Cross is celebrated, it is the big party where before the procession the ribbons and arms are distributed so that the people go with the Christ, and when they return to the Chapel, their arms are auctioned to enter the interior of the same.

On May 4, the fiesta ends, drawing the image of the Christ in procession around the Hermitage and the brotherhood of Christ invites a refreshment to the town.

They begin on August 14 with the descent in procession of the image of the Virgin of the Piety to the Church, accompanied by all the rocks. At night the "Chupinazo" is performed and then the Fireworks.

During those days also the traditional closures are celebrated, very famous and known in all the region. In these closures run the bulls that will be bullfighted in the afternoon, and end with the release of cattle in the bullring for the public enjoyment. Our festivities bullfighting are well known in the world of bullfighting, since we belong to what is known as "The Valley of Terror" in the world of bullfighting, for the seriousness, fine appearance and volume of bulls that are fought here.

On August 15 a mass is celebrated in honor of the Virgin of the Piety and in the afternoon the image is uploaded to the Hermitage in procession by the people of the town.

On August 16 San Roque is celebrated commemorating his onomastic with a Mass in his honor.

Feast in honor of the Blessed Christ of Mercy

It is celebrated on September 14, also known as El Cristo Chico, in honor of the Holy Christ of Mercy, when the Church celebrates the Exaltation of the Holy Cross. Ribbons and arms are distributed around the Hermitage.