It occupies all the north and northwest of the town with an extension of more than 1,400 hectares. It is densely and continuously populated by a single conifer variety: the "stone pine" or pinyon pine. It is an area of ​​great scenic beauty, with trails and paths to enjoy it, and facilities for recreational use.

The granitic berrocales are abundant in the area, which, when mixed with streams (such as El Moro) that run through this territory, originate small gorges and striking cascades of special beauty in rainy times.

The riverbank of the Alberche river

In the southern part of the municipality, the Alberche river, a tributary of the Tagus River flows. This area was formerly used as a cattle resting place, but with the passage of time it has become a very visited bathing area in the summer, so a picnic area has been set up. The channel of the river is surrounded by a beautiful poplar forest that gives the place a singular beauty. 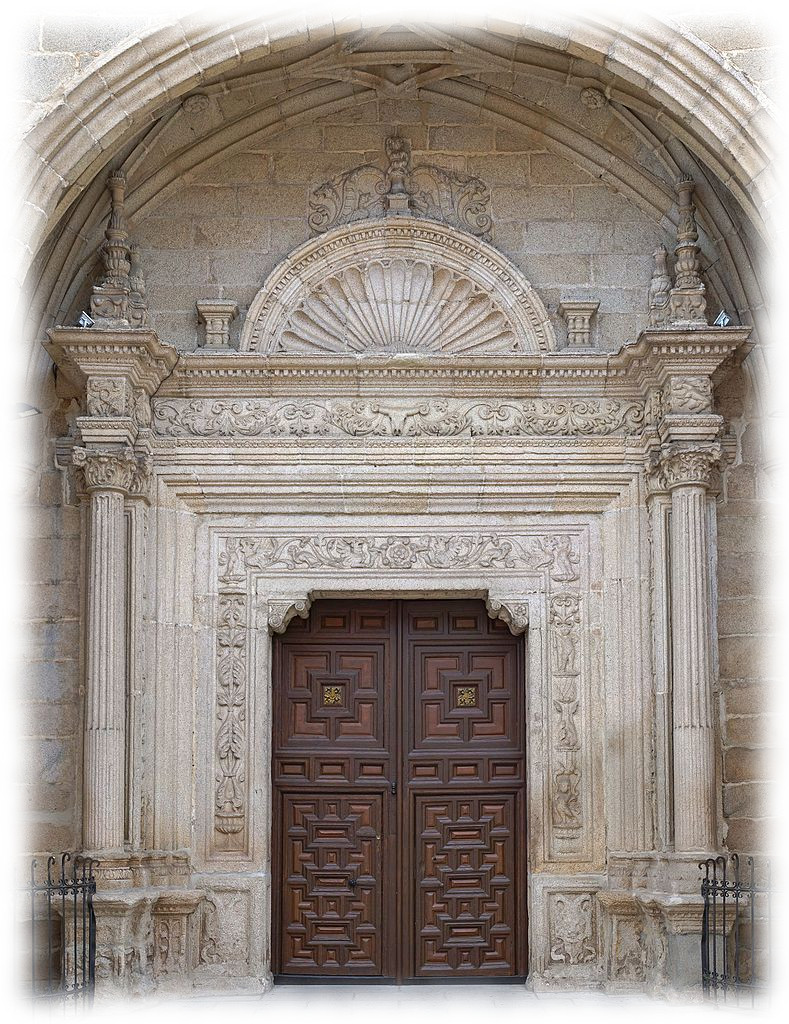 Declared an Artistic Historical Monument of national character in 1983 (in Spanish), its construction was carried out at the beginning of XVI century, under the reign of Catholic Kings, by architect Gil de Ontañón, adopting the transition Gothic style. It is built of ashlar stone, cemented on the same rock as the ground. It is composed of a single plant of 40x18m, with a barrel vault supported by ogival arches (translated by google) and reinforced by Rib Vaults.

Inside, the altarpieces of San Roque, attributed to the painter Juan Correa de Vivar, and Santa Lucia, by Alonso de Berruguete, and three other altarpieces are noteworthy. It is also worth mentioning its Sacristy, considered a masterful architectural work, attributed to Ochoa de Muniategui, whose plans were corrected by the architect Alonso de Covarrubias, which houses a spiral staircase, one-size-fits-all, one of the very few in Spain.

Outside, the north facade was carved by the master Juan Fernández in a plateresque style, adorned with Gothic and Mudejar elements. It also presents Corinthian capitals forming capricious finials.

The parish has its own page, visit it for more information. 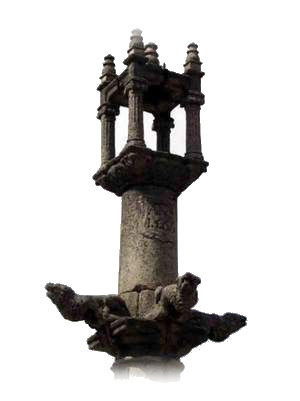 Insign monument that rises majestically in the center of the Plaza de la Constitución. It was erected in 1566, under the reign of Philip II, as a symbol of the jurisdictional freedom of the town, dependent on the lordship of Escalona until then, ​​by Royal Charter signed at Uclés on April 11, 1566.

It is a 8m-high berroqueña stone cylinder, with five steps and crowned by four heads of lions and a templete of Ionic columns. It stands out among its style for its beauty, slenderness and excellent conservation. 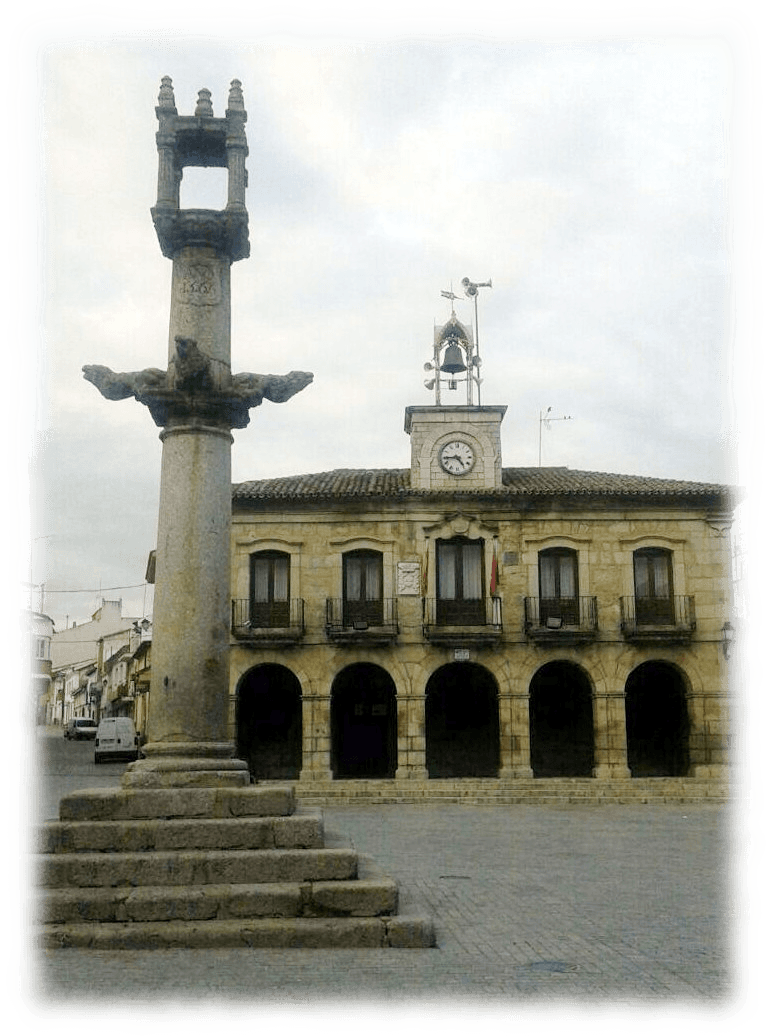 Built at the end of the 18th century, under the reign of Carlos IV, in Baroque style built with ashlar stone, it consists of two floors, with seven arches (five frontal and two lateral) standing out in the lower one, which support the balconies at the top. The civil building is crowned by a small bell tower that houses a clock.

Hermitage of Our Lady of Mercy 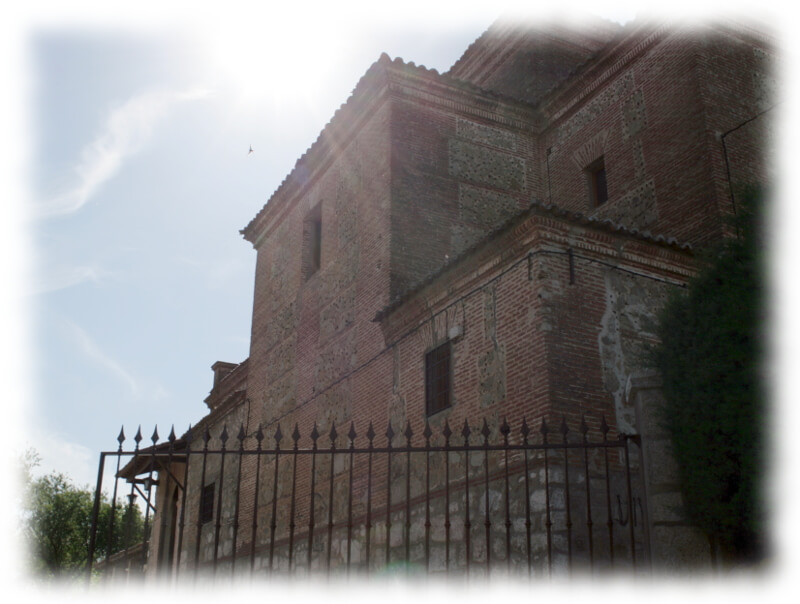 Located in the "Cerro de la Ermita", in its construction stands out the combination of brick with masonry stone, typical features of the Toledan style, heir of Mudejar art. It consists of three navs, separated by semicircular arches.

It welcomes inside the two most venerated images in the town: The Virgin of Mercy and the Holy Christ of Mercy, whose worship gives rise to the two most important festivities of the village. 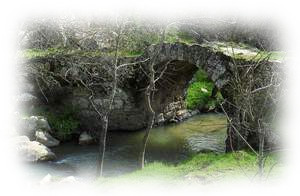 In the immediate vicinity, near the left margin of the left bank of the Almorox-Cenicientos road, there is a small gully where a bridge built during the time of the Roman colonization of the area rises. It consists of a single eye, formed by a half-point arch, above the Tabalón stream, presenting a magnificent yarn made from very well carved granite ashlar. Its excellent state of preservation stands out. More info.

On the Almorox-Cenicientos road, on the left bank, there is a bridge built at the end of the 17th century. It emphasizes, as in other constructions of the locality, the combination of brick with masonry stone. It is located on the Tordillos cove.